Facebook has expressed additional criticism towards Apple over an upcoming iOS 14 privacy measure that will require users to grant permission for their activity to be tracked for personalized advertising purposes.

For the second consecutive day, Facebook is running a full-page ad in The Wall Street Journal, The New York Times, and The Washington Post that claims Apple’s tracking change will harm not only small businesses, but the internet as a whole. Facebook says that due to Apple’s new policy, many apps and websites will have to start charging subscription fees or add more in-app purchase options to make ends meet, making the internet “much more expensive.”

The full text from the ad:

Apple vs. the free internet

Apple plans to roll out a forced software update that will change the internet as we know it—for the worse.

Take your favorite cooking sites or sports blogs. Most are free because they show advertisements.

Apple’s change will limit their ability to run personalized ads. To make ends meet, many will have to start charging you subscription fees or adding more in-app purchases, making the internet much more expensive and reducing high-quality free content.

Beyond hurting apps and websites, many in the small business community say this change will be devastating for them too, at a time when they face enormous challenges. They need to be able to effectively reach the people most interested in their products and services to grow.

Forty-four percent of small to medium businesses started or increased their usage of personalized ads on social media during the pandemic, according to a new Deloitte

study. Without personalized ads, Facebook data shows that the average small business advertiser stands to see a cut of over 60% in their sales for every dollar they spend.

Small businesses deserve to be heard. We’re standing up to Apple for our small business customers and our communities.

Facebook’s ad concludes with a link to its new “Speak Up For Small Business” page where small business owners express concerns about Apple’s change.

In an email, a Facebook spokesperson said Apple’s move “isn’t about privacy, it’s about profit,” echoing comments the company shared yesterday. “Paying for content may be fine for some, but most people, especially during these challenging times, don’t have room in their budget for these fees,” the spokesperson added.

“We disagree with Apple’s approach and solution, yet we have no choice but to show Apple’s prompt,” Facebook said yesterday. “If we don’t, they will block Facebook from the App Store, which would only further harm the people and businesses that rely on our services. We cannot take this risk on behalf of the millions of businesses who use our platform to grow.”

In a statement responding to Facebook, Apple said “we believe that this is a simple matter of standing up for our users,” adding that “users should know when their data is being collected and shared across other apps and websites — and they should have the choice to allow that or not.” Specifically, users will be prompted to allow or deny ad tracking as necessary when opening apps on iOS 14 starting early next year.

Apple said it welcomes in-app advertising and is not prohibiting tracking, but simply requiring apps to obtain explicit user consent in order to track users for personalized advertising purposes, providing users with more control and transparency. 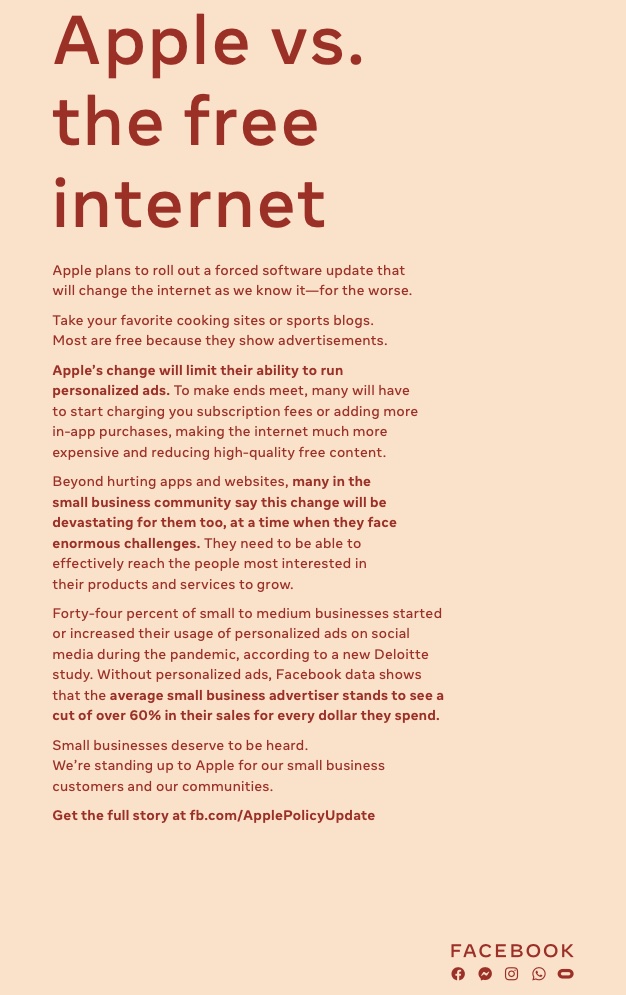