A new report published today by Counterpoint Research finds that the iPhone 12 became the world’s bestselling 5G smartphone in October, in spite of its delayed launch. 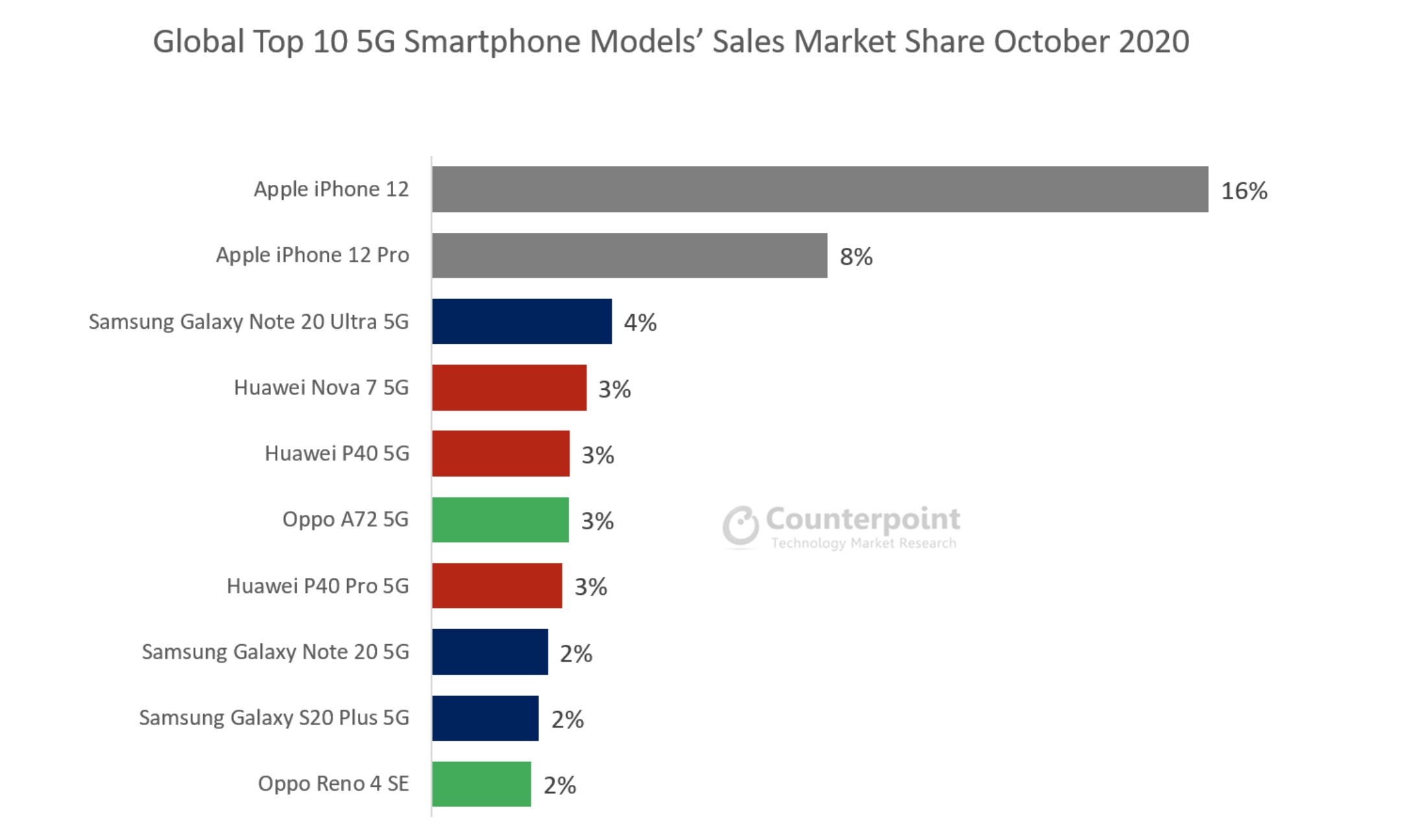 Although the ‌iPhone 12‌ was only sold for two weeks in October, it was still able to top the rankings. These two weeks’ worth of sales allowed the ‌iPhone 12‌ to become the seventh-bestselling 5G device sold between January and October of 2020.

The iPhone 12 Pro was the second-bestselling 5G smartphone, followed by the Samsung Galaxy Note 20 Ultra 5G. Together, the ‌iPhone 12‌ and 12 Pro captured almost one-fourth of total 5G smartphone sales in October.

Counterpoint accredits a number of factors to the explosive success of the ‌iPhone 12‌ and ‌iPhone 12 Pro‌ compared to other existing 5G devices. For example, it is believed that there was significant pent-up demand for a 5G upgrade within the iOS user-base. The uptick was also caused by strong carrier promotions within the United States, which accounted for over one-third of ‌iPhone 12‌ and ‌iPhone 12‌ pro sales for the month. Compared to most other 5G devices, the iPhone generally has a wider market coverage with availability in over 140 countries.

The ‌iPhone 12‌ and ‌iPhone 12 Pro‌ have also given a “much-needed” boost to the 5G smartphone market, which achieved its highest ever share of 24 percent in the global smartphone sales in October.

Sales of the ‌iPhone 12‌ and ‌iPhone 12 Pro‌ have more than doubly boosted the penetration of mmWave-capable smartphones from five percent in September to 12 percent in October. Counterpoint highlights how this is likely to impact the telecoms industry, and speculates that it may facilitate Apple’s future push into other sectors such as augmented reality or virtual reality:

This is important because it gives operators an incentive to deploy mmWave infrastructure rapidly. The high throughput and low latency provided by mmWave will help unlock the true potential of 5G. With the mmWave network and devices in place, it would lay a solid foundation for Apple to leverage the power of mmWave in segments like AR/VR.

Counterpoint expects demand for the ‌iPhone 12‌ series to remain strong through the fourth quarter of 2020, particularly during the holiday season. The late launch of the devices is likely to push sales into subsequent months, thereby maintaining the momentum of sales into early 2021.